We Don’t Need a New Jail, We Need Abolition

Speaking to the Champaign County Board on Tuesday, August 9th, local Black organizer/activist, Kadeem Fuller made a much needed case for the abolition of jails, prisons, and white supremacy. The following is a transcript of his speech.

Tonight I sit before the people of Champaign County and declare we have been set up. Once again members of our local government have attempted to set in motion a project that will doom the most vulnerable among this county’s population. Once again this county board is conspiring with oppressors of the people, men with badges, in an attempt to revitalize the draconian tactics of the War on Crime masked as a simple proposal for a safer Champaign County. Put simply this County board is attempting to sign a deal against the people of this county. This ridiculous proposal attempts to justify the construction of a jail project estimated to be 10 to 15 million dollars. This proposal places the jail project in Group A which is the highest priority category while interestingly enough places the creation of a Behavioral Health Services Facility in Group C, which is the lowest priority level. 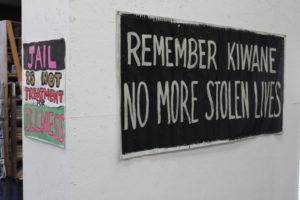 Although the proposal also mentions maintenance of the nursing home it is important to remember that the jail construction project is 65 percent of the entire proposal budget. This proposal is nothing more than an attempt to sneak a new jail into this county.

Over the last few decades much research has been conducted detailing alternatives for incarceration: methods ranging from revolutionary restorative justice to reform in policy. There are several alternatives to incarceration.

In fact, mental health services, similar to the facility this proposal places in Group C, could indeed be seen as an alternative to incarceration. It is clear this county board do not concern themselves with alternatives to oppression. In June this county board listened to several family members of people who died in the Champaign County jail. These family members suggested a detox center and a pretrial program as alternatives to the harshness of incarceration, yet neither are mentioned in this new jail proposal. These people came and shared their hearts, tears and grief to this county board and you all turned your head to them.

The proposal also stated that this jail project would address concerns of both corrections staff and community members. My question is how? How can you meet the concerns of both the oppressed and the oppressor, of both tyranny and resistance, of both a corrupt and repressive government with the calls of liberation from the people? It simply cannot be done.

I ask you what makes you all think we need a new jail? This county jails takes lives. In this county Black people represent 13 percent of the population but represent over 60 percent of those in jail. What’s more, from July 1, 2015 to June 2016, 29 deaths were reported to the Illinois Department of Corrections, with Champaign County placing second on the list with three.

We do not need a new jail.

A new jail will not solve the neglect that incarcerated people face in this county. Only the toppling of prisons and jails can do that. I condemn this heinous attempt for a new jail and I condemn the people who support it. It will not stand. All power to the people!

Kadeem Fuller is an organizer with Black Lives Matter Champaign-Urbana and Black Students for Revolution at the University of Illinois Urbana-Champaign.